Gaze stability occurs via a multi-modal network of vestibular, brain stem, cerebellar, visual and proprioceptive information that is processed within a network known as the neural integrator. We cannot rely on only a visual system, b/c as humans, we have gait and movement properties. Head perturbations range form 0.5-5 HZ, where pitch is 2x that of yaw.

Vestibulocollic reflex is highly important to stabilize the mass of the head. not able to pitch the head to compensate for bob translations during walking for people with deficient vestibular systems. Cervicolllic reflex- the stretch reflex which acts to stabilize the position of the neck/head in relation to trunk. It works together with VCR to stabilize. People with deficient vestibular systems have increased firing of muscles in the neck, leading to headaches/migraines after brain injury/concussions. In patients with labyrinthine loss, we see CCR gain increase to continue ability of gaze stability (moving to target of interest)

Combined Head-Eye movements are essential to human activity and therefore require a system that can understand the eye position and head position, giving a sum of gaze. We must be able to bring the eye to a new position to achieve targeting of the object onto the retina. The Gigantocellular region lies in the rostral medulla and are important during eye-head gaze shifts. It receives a major input from the superior colliculus for gaze stability, along with the INC, vestibular nuclei. This causes Migraines/Headaches after brain injury b/c we utilize too much of the Gigantocellular region to move our head-eyes to a visual target b/c of slowing of saccades, so we rely on the neck/head movement portion. This over-activates rectus capitus, obliquus captious and splenius capitus muscles due to the innervation of the GC region to the upper cervical cord, which also receives numerous afferents form vestibulospinal inputs, thereby necessitating a healthy vestibular system to also control these structures and limit headache/migraines via the anterolateral funiculus and the MLF that terminate on the ventral horn of the spinal cord.

PVP neurons,which lie in the vestibular nucleus and NPH, play a major role in VOR. They encode head velocity and eye position

Vestibular Nucleus Neurons encode Head velocity, the primary vestibular signal in combination with eye-position, which is encoded in the NPH-MVN region reflects the crucial relationship between the neural integrator and the vestibular system for gaze stability to occur.

Vestibular nuclei send axon collaterals to the NPH, nucleus of Roller and cell groups of the paramedian tracts (important for relaying information to the flocculus, or vestibulocerebellar regions involved in gaze stability). The NPH is crucial for holding gaze stabilization and is intimately involved within the vestibular system as shown. In the vertical system, the INC, which also receives secondary axon collaterals is crucial for vertical and torsional gaze holding.

The VSM is also important for prolonging information from low-frequency head rotation, so that the head velocity and eye position can be further interpreted appropriately.

The VOR is dependent upon the relationship between the axes of head and eye rotation so that the eye rotation is parallel to that of head rotation. This stresses the importance of appropriate tilt from translation and also appropriate otolithic and cervicospinal mechanisms to allow as smooth a ride as possible for the Vestibular and Neural Integrator to provide gaze stability through motion.

Vestibulocerebellar influence on the VOR

consists of the Flocculus, Nodulus, Uvula and Paraflocculus. The flocculus receives bilateral, mossy fiber inputs from Vestibular Nuclei, NPH, Pontine nuclei and NRTP. It receives climbing fiber input from the contralateral inferior olivary nucleus. It projects to ipsilateral vestibular nuclei, y-group and the basal interstitial nucleus of the cerebellum. Particularly important are the FTN in the vestibular nuclei, which play an important role in vestibular adaptation. It is proposed that the error signal for inadequate VOR-slip of image on the retina- is relayed, via the inferior olivary nucleus and climbing fibers, to purkinje cells of the flocculus. Purkinje cells would then make appropriate changes in the VOR via their projections to the vestibular nucleus. 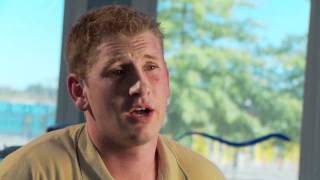 What is Meniere's disease?
Play Video 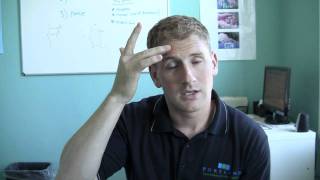